Life isn’t about waiting for the storm to pass; it’s about learning to dance in the rain.
— Vivian Greene 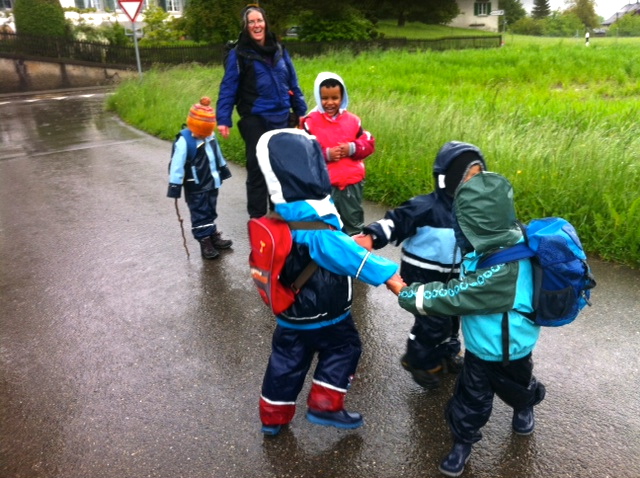 It rains quite a bit here in Switzerland and this has been the rainiest spring in recent memory. It was so bad the other day we stayed inside our farm house classroom all day. A rarity indeed. Yes, nine preschoolers and two adults. We all survived. In fact, we more than survived. We made the most of it, talking and singing about the rain, playing like wild lions and tigers, making rain sticks, and decorating stones with flower petals and glitter. Busy, lively, chaotic and tons of fun. But, we would rather be outside… even in the rain.

After hearing about overflowing streams and flooding, even, I, devotee of the rain, was forced to admit that maybe we’d had enough. I feel almost guilty admitting this as if I would be somehow be disloyal to my dear friend the rain. Never! We owe our rich verdant Swiss landscape to the steady and variable wringing out of the clouds above. I grew up in the comparatively dry climate of northern California. Green was not a color we associated with grass much after Easter. And umbrellas evoked images of Mary Poppins rather than something to be used as a means of staying dry.

My childhood drawings always included little flowers growing out of the green grass. This was something I had never actually seen in real life and assumed existed only in my imagination or on the pages of my favourite books. To this day, I marvel at the first primroses of spring popping out of the rich green grass here in Switzerland. Storybook flowers I call them.

There is a lot of storybook stuff here in Switzerland, even the rain. It is especially magical in summer when temperatures are downright comfortable and a downpour or two is welcome refreshment. I love the days with the kids in the forest when its warm enough not to bother with our waterproof rain trousers, when soaking-wet isn’t cause for concern, and a pair of mud encased pants can be worn as a badge of honor or possibly even stand up by themselves. Storybook.

On these rainy summer days, seeking shelter becomes a thrilling adventure. The forest canopy provides such remarkable cover I’ve rarely had to resort to tying a tarp between trees to create refuge. It’s so exciting crouching together under the big beeches presumably waiting for a lull in the rain and secretly hoping it never comes. The forest canopy provides such good cover that it seems the entire forest is our secret fort.

One day, during a sudden downpour, I ducked off the path into the forest and joined a stand of pines on the edge of the path. I managed to stay fairly dry as I listened to the dramatic hail bouncing off the forest roof. I don’t think I’ve ever felt more present. Yet, at the same time, I seemed utterly and powerfully invisible. I remained a long while during which several groups of people passed by. Although well clad in foul-weather gear, most passersby were nevertheless, trying, futilely, to run between the drops. I was only about a meter away yet no one noticed me… not even the dogs! It was a marvelous moment and in my four-year old imagination, I was convinced I must have simply turned into a pine tree.

Some rainy adventures, however, have the potential to be more Grimm fairytale than magic storybook. We had one such experience recently when a lovely misty drizzle suddenly turned into a cold, hard downpour right in the middle of our picnic. On such occasions, delight and adventure can turn to discomfort and distress in a manner of minutes.

I was enjoying the heck out of the idea that we were picnicking in what became the pouring rain. I was trying to jolly up those kids who were less than enthusiastic as their sandwich began to get get soggy. Lilly Rose, as beautiful and delicate as her name suggests, was beginning to look distressed as the drops began to flow like rivers down her tender face.

“No…” she answered as if searching for the word that might describe this new experience.

“Uncomfortable? ” I then asked.

“Yes, I am uncomfortable.”

It was time to pack it up and make haste back to farm. There was no way we were going to be able to run between these drops, and I was a little worried dear Lilly Rose and some of the others might be reaching their limit.

Apparently not, the adventure had just begun! On the way, a few intrepid kids, stood under the shower of the overflowing rain gutters on the barn, thoroughly enjoying the excess of it all. It looked absolutely delicious. I wanted to join them, but I knew I wasn’t dressed for it. At that moment I decided it was time to invest in a new raincoat, one at least as waterproof as Manuel’s, who managed to remain bone dry through it all.

Later, back in our cosy classroom, we sat around the lunch table enjoying our warm tomato soup. I asked the kids as I do each day, “What was the best part of the morning?” And without missing a beat, a little voice piped up “Picnic in the rain!” And it was none other than Miss Lilly Rose. 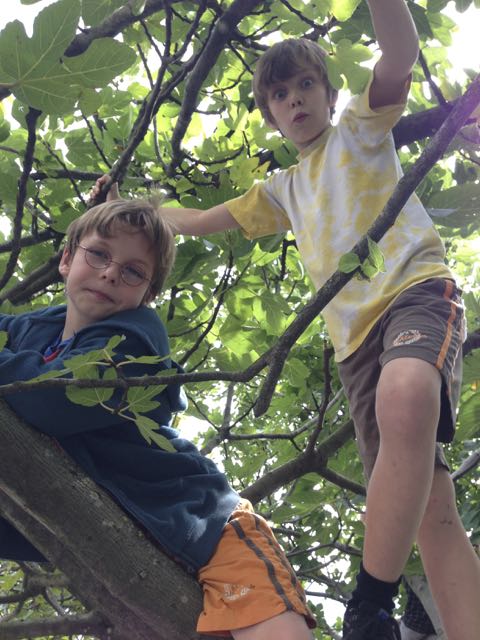 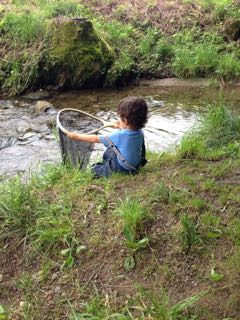 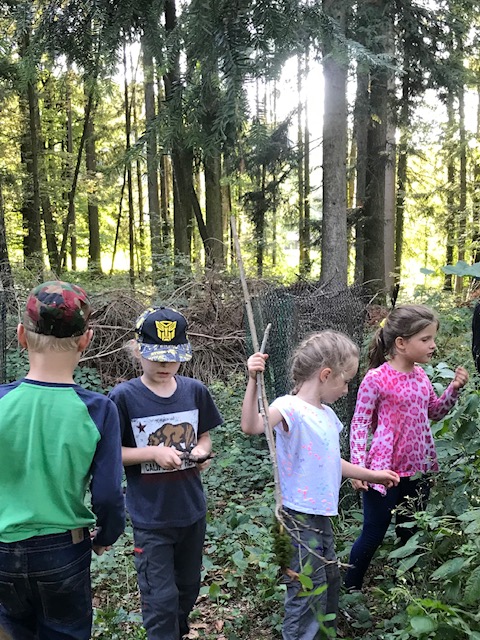 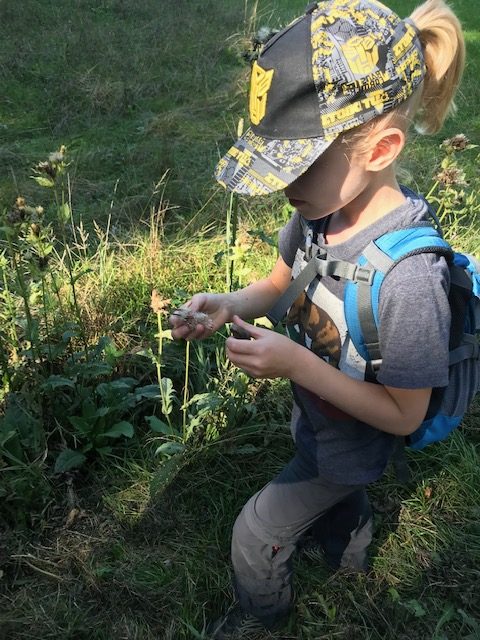 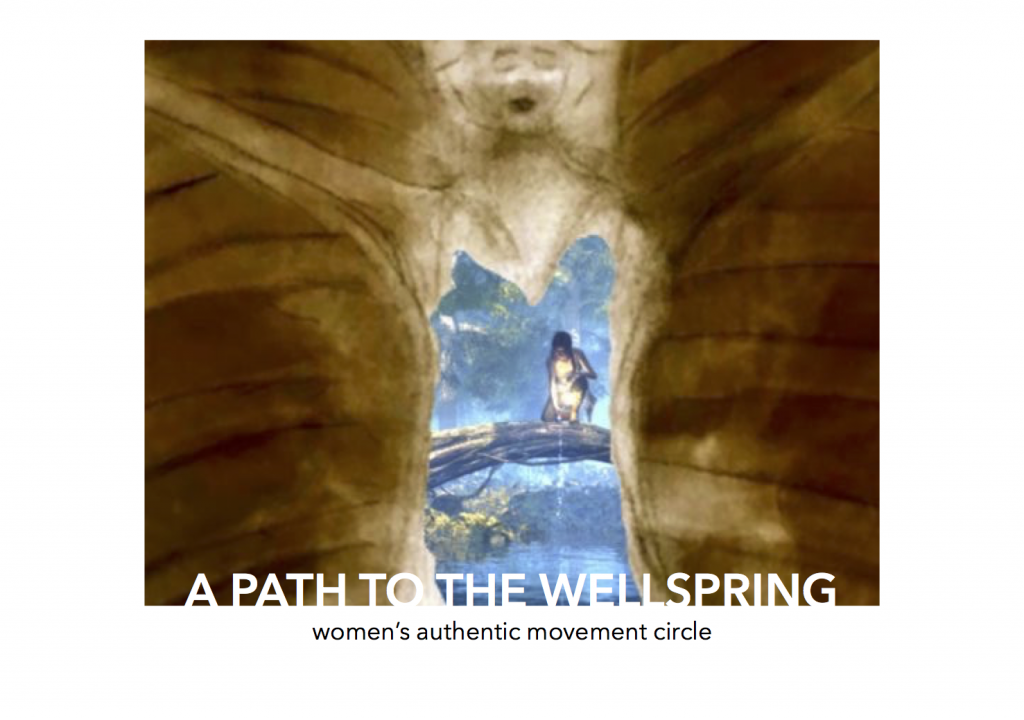 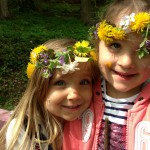 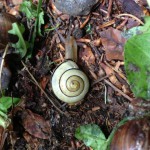 In Praise of Snails
Scroll to top