Our morning began with a customary visit to our little garden. “Tickets please!” A small dark-haired boy with a with a most serious look on his face, holds his hand out and collects the imaginary admission fee and the children file into the garden one b

We’d already detected the tiniest sproutings of our tulips a good two weeks ago. Since then the progress was marked and the little plants were standing at attention in a fine line. Who could resist the urge to count them! Different kids gave it a try in both english and german. Most petered out around ten and started randomly pulling numbers out of the air, 7, 10 13, 4… Others had the sequence down pat yet had not made the connection that the numbers correspond to the objects at hand. Next we counted the young tulips plants altogether, pointing gently to each one as we went. One, two, three,… ten, eleven, twelve,… twenty-one, twenty-two, twenty three! Twenty-three tulip plants in a row!

To date, we haven’t done much else with our little garden, other than plant these bulbs, and visit our dragon weekly. There are, however, a collection of sticks in the corner. I assume these are fence posts of some kind the farmer has left for us to utilize. And utilize we did.

Abadit and I stood by quietly grinning to each other as we watched the strange and wonderful dance unfold. One by one, the children acquired a stick and began slowly and purposefully walking around the small rectangular garden space, poking the ground from time to time. A couple of girls paused to offer some slow-motion jousting movements upon encountering each other. The boys, lifted a pole horizontally overhead then the construction dissolved and the choreography continued. The dance of the nursery school druids proceeded for a while then came to its natural conclusion and we propped the sticks in a row against the wire fence. “One, two, three…”

For, me, the once and future choreographer, this was a fascinating performance. “Purposiveness without a purpose.” I remembered Kant’s description of the aesthetic act from my university days.
The same can be said of play, I mused. In fact, from my vantage point, creativity and play are pretty much expressions of the same impulse.

This particular constellation of children has an uncanny ability to come together, cooperate and play as a unit, both with and without purpose. Community at its best, and, I suppose, a sinister sort of Borgian group-mind at its worst. But don’t worry, there has been to date no evidence of the latter among our kids. The children have a much-loved game in which they all lie down together in the middle of the street, usually to ambush Abadit and me and scream at the top of their lungs as we approach. The purpose of this game is, of course, to scare the Bejesus out of us, and we gladly oblige by clutching our hearts and letting out our own startled shrieks.

Often, they plunk themselves down, one by one, in a row on the edge of the path and rest together, even in the snow, or all climb aboard the big tree stump and play bus. Today in the forest, all were participating in a classic game of domestic bliss complete with Mommy, Dad, Big Sister, two small cats and two dogs. As Big Sister was attempting to herd the cats, the two little dogs took a break from the action. They filled our little plastic specimen container with nuts, leaves and small pine cones, took a requist look through the magnifier, then laid the items out neatly on a tree stump and began to count together. “Eins, Zwei, Drei…” 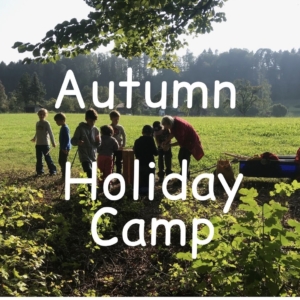 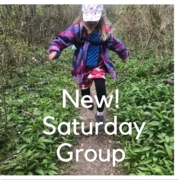 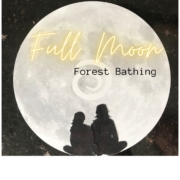 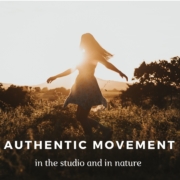 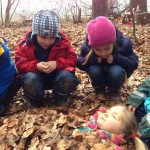 The Gifts of Attention
Scroll to top